Four the glory! Today readers I am starting a new segment that I hope will take off and become a semi-regular occurrence. If you have ever walked into a store dedicated to selling a wide array of board games then you know gamers are spoiled for variety. While Hollywood movies may all be all based off popular licenses and modern remakes of classic movie or television shows, original themes in gaming pop up all the time. Sometimes when I speculate designing a board game with an original theme I struggle to touch upon something that has never been conceived into tokens and dice before. In addition to these original ideas that remain in a constant flux, there are several hundreds of board games that are based off of already popular licensed properties. Marvel, Lord of the Rings, Alien versus Predator, and just about any widely known nerdy or mainstream intellectual property on the radar have been turned into board game form. However, I often am hit by inspiration that some licenses have not been pinned down yet, despite their obvious potential for a game to be made from them. In this new segment I am naming “Wishing License” I will bring to you my ponders on book, television, and film properties that according to BGG have not been made into games at the time of writing. I will share a little about each one and hope they inspire clever designers out there to take the reins and run with what could potentially become a wonderful game.

Call the Midwife is a show that my wife started watching without me, which turned out to be a grave mistake because I freaking love it. The show takes place in the city of London’s poorer districts during the 50’s or 60’s and showcases the lives of nurses and nuns trained in the art of midwifery. They follow a couple or so story lines that usually involve the birth of at least two babies with mothers that have their own drama which clashes with the purview of the midwives. Watching the way these midwives manage nearly all of their time into helping the community even under emotional duress is inspiring. I could easily see this as game of worker placement while coping with time allocation and cooperation (I’ve never seen the nuns openly fight, dare I ask for the season finale?). Perhaps players would focus their different midwives moving around the city each playing to the wide cast of characters’ diverse strengths and failings.

Viva Pinata 2: Trouble in Paradise is one of the greatest video games I have ever played, and if I still had access to an XBox 360 I would still be playing it now rather than writing this blog. The world of Viva Pinata is a colorful and diverse land where living pinatas mirroring dozens of species of animals live in lush gardens. Each Pinata is filled with a particular kind of candy or food; your Fudgehogs (hedgehogs filled with fudge), your Horstachios (horses filled with pistachio nuts), your Sparrowmints (Sparrows filled with mints). The game requires you to cultivate a garden habitat to attract and then breed exotic and delicious pinatas before plumping them up and selling them to parties where they will be smashed to bits and hopefully attain … Pinatanirvahna? The game is a blast. Customizing a garden in meticulous order and aesthetic to appease rare missing links in the candy food chain screams resource management. Imagine trying to sway prospective pinatas away from your opponents by planting the finest grid of schnozzberries and water features. The main obstacle I see in a game such as this is the sheer amount of content that could be tapped into, but that simply allows expansions.

The Lost Room is a short, but astoundingly sweet miniseries from the Sci-fi network that my pal Gabe introduced me to way back when. The series revolves around a unique set of seemingly mundane objects that actually possess reality altering powers. Examples include a pencil that can create an infinite amount of pennies and a bus pass that banishes people to New Mexico. These objects have strange ways of corrupting or creating dependency in their owners and also have the canny tendency of attracting each other. There are multiple factions within the program all of which have different ideals for the purpose of the objects. A game designer could do a variety of different games with this IP. Perhaps a social deduction and bluffing game or maybe something with set collection. If you haven’t seen the series before it is only six episodes and is very cheaply available on Amazon. 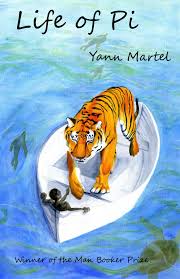 Long before the technology lords digitized all human thought and knowledge to be data mined in the vast hard drive kept on Mars, mankind lived in caves and read letters off of bound papyrus called books. It may shock you to believe that many of the intellectual properties you love today were once bound on paper before being turned into video. Life of Pi is the remarkable story of a boy who must live on a boat drifting through the ocean with a tiger. There are several board games involving cooperation, exploration, survival, competition, and desperation. This story has these themes in spades which could be translated into many different board game concepts.

I have only scratched a small surface of untouched intellectual properties, but what are some that I may have missed? Sometimes I think I see another Star Wars or DC Comics board game coming out every month, so why not look to something a bit less wrung out. If you can think of any licensed properties that you think would make a great game let me know!

And now very quickly let’s hit up some Kick Starter gold that needs to be uncovered!

Coup: Rebellion G54 I have literally played over a hundred games of Coup. This is not an exaggeration, my co-workers and I used to bust out three games every lunch break for months on end. The game involves a small deck of fifteen cards and trying to deduce and eliminate the cards your opponents have. There are five character roles in the deck that balance each other quite well and lying/bluffing/cussing is fully encouraged. The only drawback of the game is that it can be repetitive if new blood isn’t brought in every once in awhile. Now the crafty designers have introduced a new version with fives times the number of characters that can be combined to suit your play style and offer mathematically hundreds of playing deck sets. I will definitely be purchasing this next year, but if you are interested now then you should hurry, the game is in its last 48 hours to pre-order. 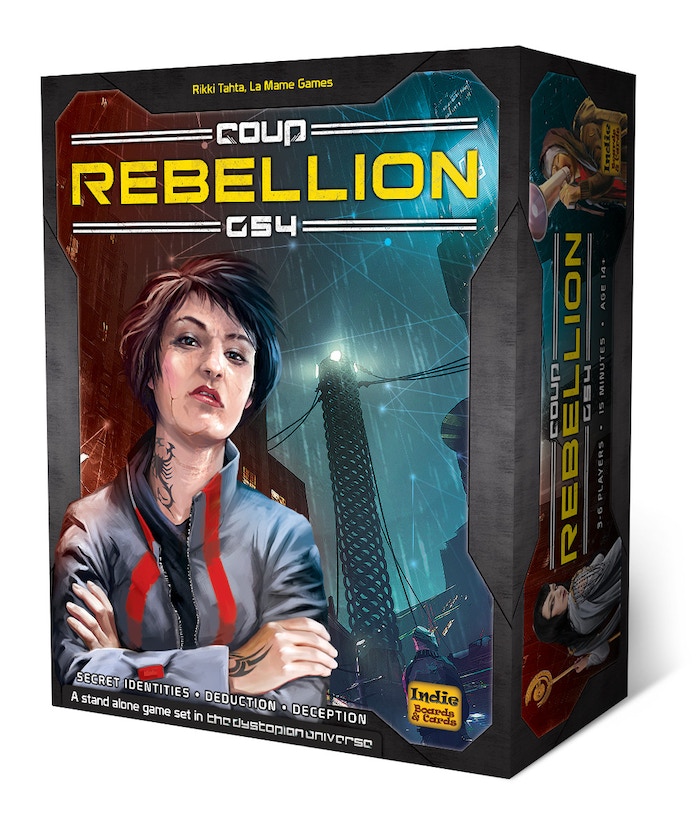 Heldentaufe Weird name, but incredible looking game. Just staring at the art of the wee heroes and monsters draws me in. From what I have seen in the game’s previews I could easily seeing this being a hit with families who do not want to get bogged down by heavy rule sets while still enjoying a diverse amount of strategy and replay ability. The design choices in the characters and components would be enough to warrant a look, but knowing this has potential to be an easy to teach gateway game would garner my purchase. 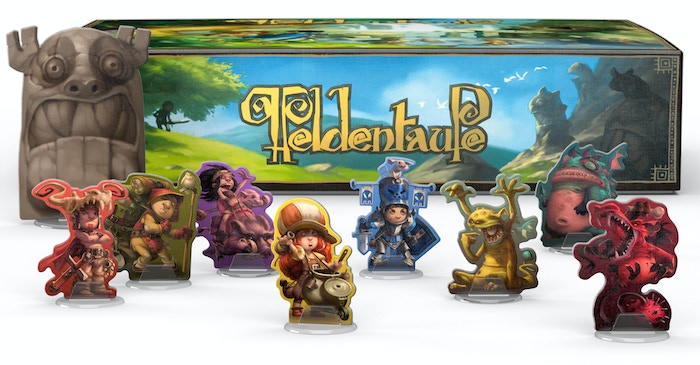 Evolution I have a secret love for Euro games, but I do not own many. This is one of the games that I wish I had more time to play and almost made my 2015 Challenge List. The game uses cards and food tokens as resources to create a number of imaginary species in a shrinking ecosystem. Players are treated to captivating nature art and serious tactical variations while trying to outplay each other and suck up as many tasty cardboard food tokens as their happy little family of Noah’s Ark rejects  can consume. Now the game is being reprinted for a second edition as well as an expansion built around flying fauna. Worth a look and a game that I won’t be turning down after my challenge list is completed. 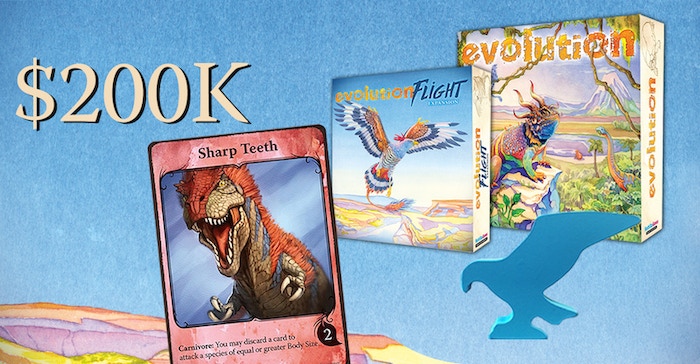 Wombat Rescue You waited for a tasteful, intelligent, innovative family game about marsupial stool (marstoolpial?) and here it is. Wombat rescue promises to be the first game about genuine septic production that I would take seriously whilst absolutely not taking it seriously. A game of wombat exploration while capitalizes on the fact that wombat scat is indeed cubic (look that shit up!) is not something a man just turns a blind pink eye to. I will be watching the reviews for this game fervently after it funds, and even though it will never make it onto my shelf (board game or bathroom) in a hundred years, I still would like to play this game once. 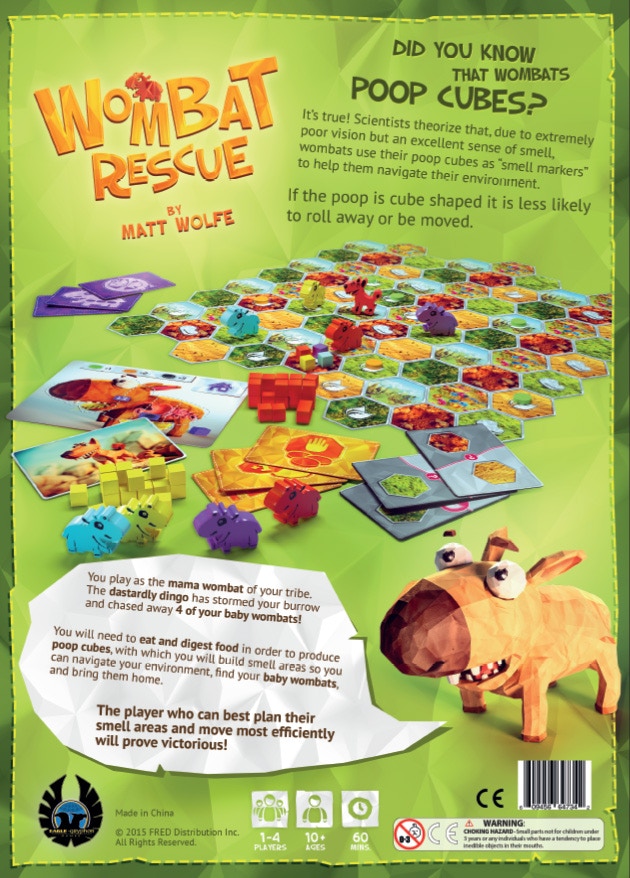 As usual all games and intellectual properties belong to their owners and thanks for reading. In the next couple of weeks I am going to take my 2015 Challenge into high gear and hope I will be able to share my master plan then. Remember to wash your hands often gamers!

Little Brother has arrived! »
« May 2nd Challenge Update and Musings