A quick update tonight as I am working overtime and am exhausted. My little brother Brayden is here visiting for a few weeks and we have played some new games together and had quite a blast. Thanks to him and Megan I have hit 39 out of 100 plays as of June 1st. I am slightly behind schedule, as I had planned to hit 40, but that will be remedied this weekend for sure. Here are some of the games off my list that we enjoyed.

Brayden, Megan, and I escape the Forbidden Desert thanks to Megan’s timely meteorology, my peerless navigation, and Brayden’s ability to pick things up and put them down!

Five Tribes is the mancala like game of moving meeples and controlling a desert city. I have been very eager to play it and Brayden and I both really liked the experience. I will talk about this game later after I dip my feet a second time and get Megan’s opinion. All I know is I have to play this one again.

Having fun, despite trying to pick the optimal way to screw Jake over. Our game felt close, I only won by eight points.

Smiling because he is about to assassinate two more of my doomed viziers.

Boss Monster was a game Brayden was attracted to from the box cover, which features classic video game characters in pixelated art. The game is about old school video game bosses building the perfect dungeon to entice adventurers who will up their kill count, without  biting off more than they can chew and letting the heroes thrash their house. The art is really hilarious and filled with tons of punchy jokes and nerdy references. We have played two games and are tied, even when I thought I was going to win for sure on our second match. There is a lot of depth in this deck of cards and we bought the expansion right away.

I Hate Zombies was a small card game I backed last year to support Board Game Geek. I printed out a test copy and took it to work, where it went over sort of blah with my co-workers. I shelved the game assuming I might never play it again or would give away. The game is essentially glorified rock paper scissors with a theme of zombie combat and survival. Brayden loved the game and I couldn’t help but offer him my copy. I have to say that I judged the game too early and that with the right audience any game can be exciting. We played an epic back and forth game where zombies were cured and turned all over again before an epic policeman nearly saved humanity, but was pushed off the brink. 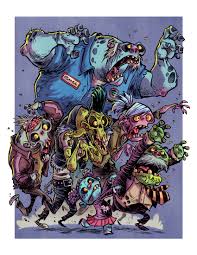 Finally I want to give a nod to a new game store that turned out to be an incredible gem. Diversions Puzzles and Games. Located in downtown Portsmouth they have a completely free demo game library, they allow food and pets for crying out loud! While Brayden and I were browsing I heard the two very polite and helpful employees discussing in depth the merits of setting up an all worker placement gaming shelf. That was when I knew I was home. I will definitely be returning soon.