Happy Hanukkah (and the Final Countdown!)

Hoo-wah! Is it December already? Here I am with only 10 games left to finish my 100 Play Challenge and finding it hard to believe Megan and I have come this far. It certainly doesn’t feel like a New England Winter yet. Not an ounce of snow has fallen, but some days it rains for hours at a time. 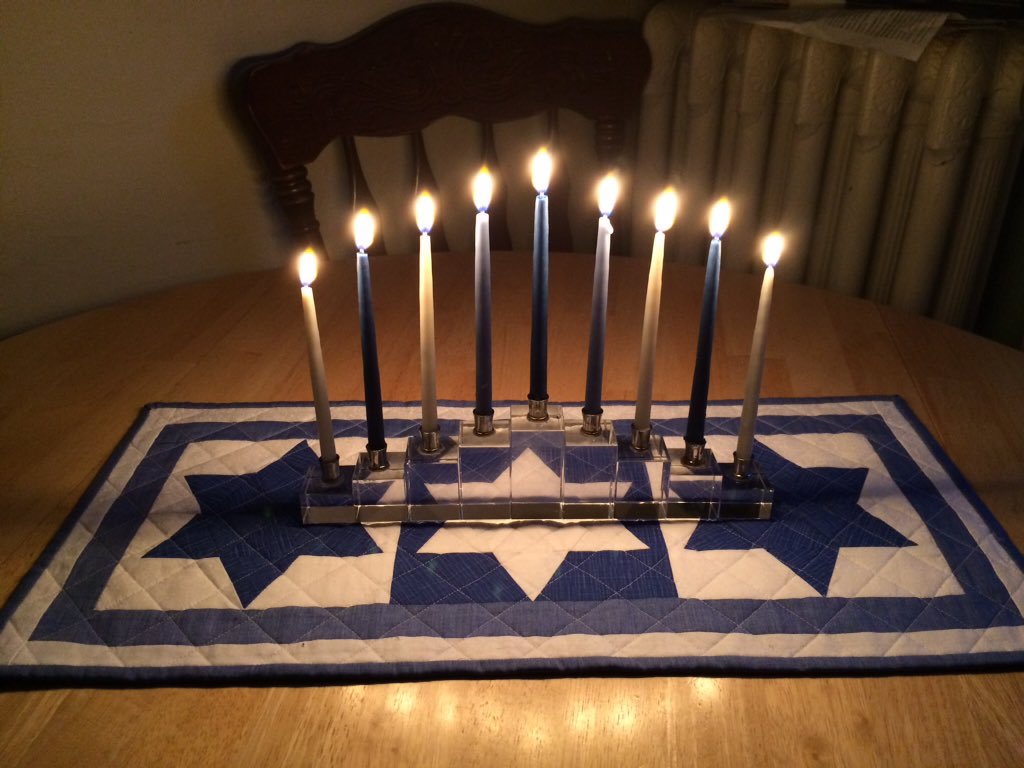 Megan sewed the cool Menorah mat shown below, she so crafty.

Hanukkah has come and gone and with it some very sexy game acquisitions! My darling wife caught a terrible disease in the form of “Cooperative Game Fever,” and what started as a tactical masterminding of Matt Leacock’s Forbidden Desert has evolved into a rampant case of Pandemic! Pandemic takes the same notion of multiple players working toward one shared goal whilst delaying multiple losing conditions in a race against time. Instead of escaping a bleak and hopeless sandstorm the game involves globetrotting around the world to treat and cure four bleak and hopeless diseases. We haven’t won yet, but are getting progressively better. The multiple roles available in the core box have Megan and I theory crafting even in our dreams. If anyone knows of any good role combos for 2 or 3 players just starting out, we would appreciate the help.

We haven’t saved humanity yet box … not yet.

Our good pals Greg and Georgia came over for the first night of Hanukkah and we had a go at the game I won from the amazing company CoolMiniOrNot called On Her Majesty’s Service. This is a steampunk horror style racing game where each player must move through a clockwork board buying and selling different ethers while also being hampered by the curious minions of the “Shadow Master.” Players can offer the S.M. bribes to try and get in his good graces and receive help from his lackeys, who run the gamut from a creature out of Aztec legend, an insidious witch, or even this creepy little Victorian boy with a horse skull for a head! While hampering your opponent is easy, there is a lot to pay attention to and judging how close each person is to victory seems like a big part of the game. Greg and I spent our turns arguing over who the Shadow Master’s BFF was and before I knew it Georgia had squeaked out the win! 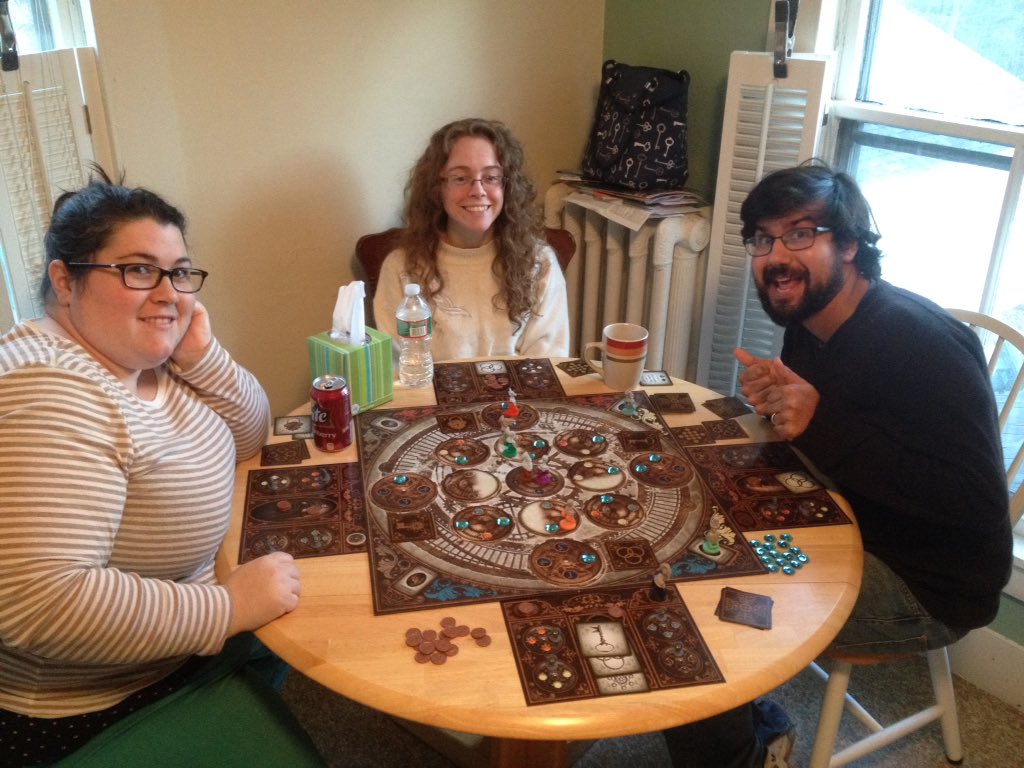 The board actually shifts around as you take actions on it, like the gears of a clock, timing is everything!

I mentioned I won this game from the most generous and not Shrek-obsessed fellows over at CoolMiniOrNot. They can be found on the twitterverse @CMONGames and also have a hilarious podcast called The CoolMini Cast over on iTunes. If you feel your life lacks unprecedented opportunities to win board games or are failing to meet your quota of spot on impressions of Deckard Cain eating a P’Zone then seek no further than yonder twitter feed or podcast!

While he was here Greg also introduced me to the soul-crushing, yet invigorating cooperative game of Ghost Stories. This was a defensive combat game wherein 4 do-gooder Shaolin monks and 9 try-hard yokels attempt to protect their village from the undead vanguard of a warlord so badass he managed to conquer hell itself and returned to the mortal coil with a thick deck of murderous ghosts and ghouls. The game was hard and offered false hope at every turn, and while we had to cut the game short I still had an incredible time and would definitely play again anytime! 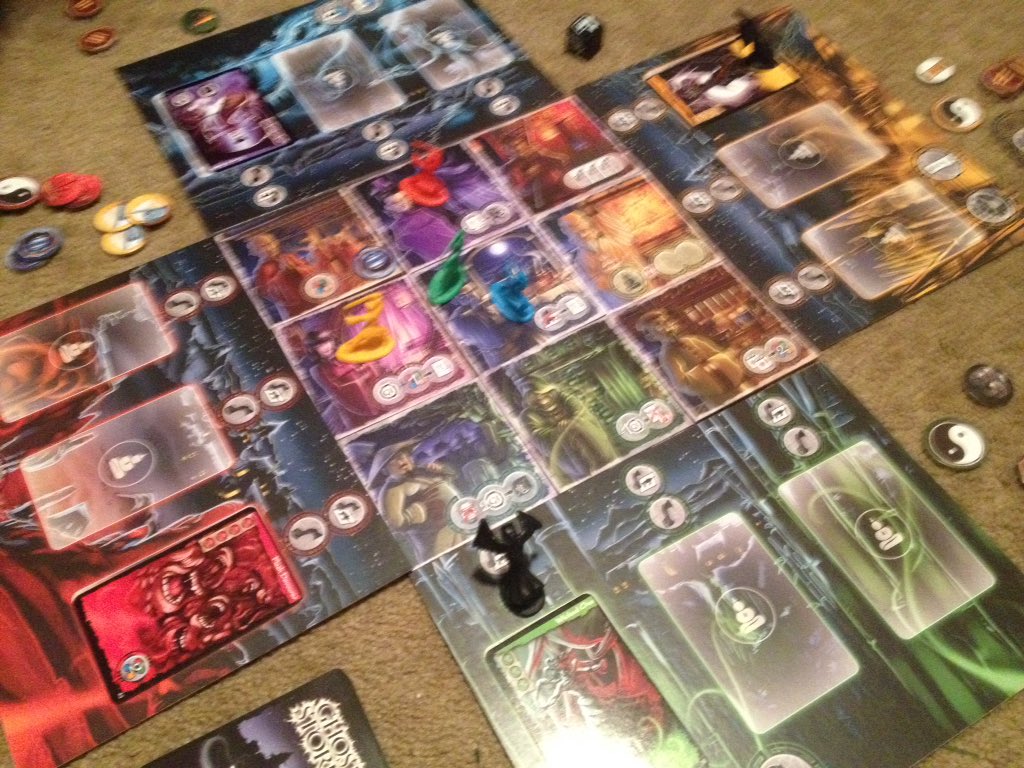 Sorry for the blurry picture, blame the ghosts if you like.

Here we come to the narrow stretch my friends. In just 16 days I have to complete ten game sessions remaining on my list. I am cutting it pretty close, but am certain with my lovely lady by my side this goal will be swept asunder. There are many new games to look forward to and other gems in my collection that have been slightly neglected in lieu of our 2015 Challenge, but the hour of closure draws nigh!

Questions of the Week:
What is the most difficult cooperative game you have ever played?
-and/or-
What is your favorite role in Pandemic? (not just the core box)