I’ve been dealing with the usual writer’s block and balancing of playing games versus writing about games this month. I got some really good plays in and a few that were less good, but taught me an interesting lesson about the games I was playing. I also broke down and bought my first expansion for Legendary: Marvel and got to try out some of the Guardians of the Galaxy, long of the short it was awesome and looks to be a permanent feature (at least while I am playing). I wanted to strike while the iron was hot and shine a spotlight on a Kickstarter project I am backing and give you the chance to check it out.

Masmorra: Dungeons of Arcadia is sort of a mish-mash of many of the games I love and already own. It is a tile and dice based dungeon crawl game where players each control a single fantasy hero from the already awesome Arcadia Quest fictional universe. The players roll dice and then allocate them to different actions to explore a dungeon and race to a certain experience level. I wouldn’t bother suggesting this game or even funding it if I hadn’t read the rule book, watched game play videos, and been convinced that it combined mechanics from some of my favorite games in a combo that reaches serendipity levels on the same scale as Snickers Peanut Butter Squares! It really looks like a good dungeon crawl in a box that is simple and quick enough without taking over a half hour to set up (hopefully) and not being crowded by dozens of miniatures. The monsters are represented with dice, with each die face depicting a monster with different stats and abilities. I could easily see this as being a great gateway dungeon crawler for kids, families, or friends who aren’t too involved with the gaming hobby just yet. The icing on the cake is that just recently it was announced that the game could be played competitively OR cooperatively (also solo), which was just the icing on the cake I didn’t expect to see! 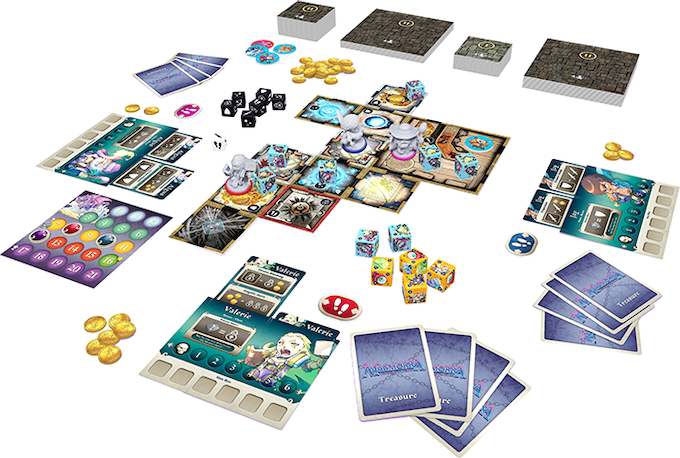 A very colorful looking game, it may look a little busier, but compared to some dungeon crawlers I have played it looks tame.

So what other great games does this remind me of? One of the first card games I played as a kid was incredibly popular with my friends and cousins which was Munchkin. Munchkin, which now comes in over a dozen varieties and flavors based on its avalanching (new word-you are welcome) success is a card game that revolves around players seeking out monsters and racing to a certain experience level while using every card and piece of gear at their disposal to ruin and backstab one another. While Masmorra doesn’t feature player on player direct conflict, many cards and mechanics involve screwing other players over to slow them down. One of my preferred gateway games to teach is King of New York, which also involves rolling a pool of dice and strategically re-rolling them to create an action pool each turn. With only six different outcomes per die a player can formulate a very specific, yet effective strategy without being bogged down by too much information – keep it simple stupid! I am beginning to accept that I am just the kind of gamer that loves dungeon crawls both to collect and play. I don’t deny that I get a giddy satisfaction in games like Wrath of Ashardalon when see can only see the edge of the dungeon board and have no idea what the next tile in the stack may be. Sometimes I marvel at just how crazy the dungeon board gets at the end of each game and love running around pointedly trying to kite the monsters as pursue our heroes through the catacombs. Masmorra also has also features dungeon tiles of varying design and opportunity. Finally you have the chibi anime art style of Arcadia Quest, which I already enjoy, although I admit it is not for games that take themselves too seriously. It is good to see some crossover since some characters in Masmorra can be played in both games, but not all unfortunately (yet). 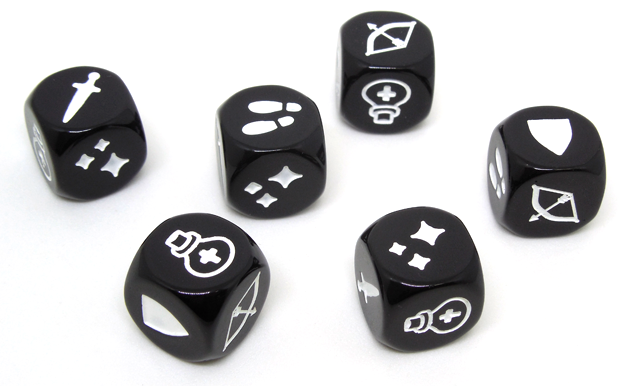 The player action dice with icons for sword and bow attacks, magic, defense, movement, and healing.

I can’t guarantee that this game will be good, but it is a decent price and combines excellent miniatures with hopefully solid game mechanics. The game looks like a simple dungeon crawl that I can play without having to manage handfuls of stat cards or expendable monster miniatures, maybe something I can play on an afternoon where I simply don’t have the patience or time to set up Super Dungeon Explore. I can guarantee that CoolMiniOrNot is a solid board game company that always delivers their Kickstarter projects in a professional manner with tons of freebees and extras to people who are willing to go out on a limb and pre-order something new and exciting. 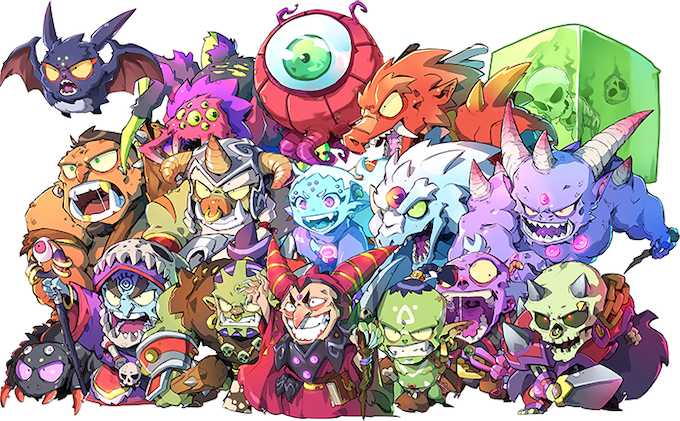 All of these vicious beasties are represented on only twelve dice and a few tokens.

Thanks for your patience everyone with the low frequency of my posts. I am still trying to keep to a Sunday writing schedule as often as I can, but honestly if it comes down to spending an afternoon writing a post or playing a game with my wife and snapping a few pics I am going to choice table over typing more often than not. I hope when you have the choice you always choose board gaming and quality time dear reader!