We are not idle! & Road to Legend First Impressions

I haven’t written in ages and up until last week I had barely played any games at all. There is good reason for this as Megan and I have been diligently preparing for our move from wonderful (never dirty) Dover to a new rental place much closer to my place of employment. We have been consumed with the notion of cramming things in boxes and donating heaps of stuff to Good Will and Savers. A few weeks ago I cracked open my gaming journal and a few moths flapped out weakly … I was shocked to discover that I had gone whole weeks without playing even so much as a solo game!

Luckily this past week I was able to enjoy a little staycation away from work as my mother and brother were up visiting from Tennessee. I managed to introduce them to several games and Megan and I allowed ourselves to be stuffed with more restaurant food than I feel is respectable to the human body. Now that my relations have flown back to the land of tornadoes and conveniently placed hillsides, we are ready to crack down for the home stretch (pun not intended but nice!) and enter this new chapter in our lives.

Lately however I did get to put the test gloves on with Dad and try out the new application from Fantasy Flight for their Descent 2.0 line. The app was released on May 12th after over a month of radio silence on the official web page for the Journeys in the Dark. I am genuinely pleased with how it turned out and would like to share just our initial thoughts from the tutorial scenario.

The app acts as an extra player simulator in control of the Overlord role and monster figures. Instead of a standard quest as laid out in the normal format; the app provides a current objective and an open ended map that players can explore and reveal over time. In lieu of Overlord cards the app springs surprise tactics and advantages for the monsters. Another curious thing is that the artificial intelligence totally surprised us. I ran an initial test on the tutorial quest to see how it flowed before starting the actual campaign, the intro quest was interesting enough and features a couple exciting bumps in the road. When I ran the actual game the next day the app suddenly revealed something called a Peril Effect and dropped a pack of giant spiders right on top of us! This was unprecedented, definitely not present in the first excursion but I totally loved it. If I am reading the instructions correctly taking too much time to reach an objective causes the AI to react in a most cheeky manner. This is something I look forward to seeing in future plays.

The other teensy, but notable, details are that the app allows you to go to town and buy item cards, we literally spent over a half hour squeezing our wallets of in game gold and even resorting to hawking our starting equipment just to buy one more ranged weapon. There is also a built in collection manager that provides more varied content on what Descent products you actually own. I was a bit sad to note that the app does not work with the old 1st edition heroes from the conversion kit, but hopefully all the old heroes will be re-sculpted and released if they are missing your favorite. All in all it was a highly positive experience and I eagerly await the first set of downloadable content in the form of a full campaign featuring one of the lieutenants from the core set. 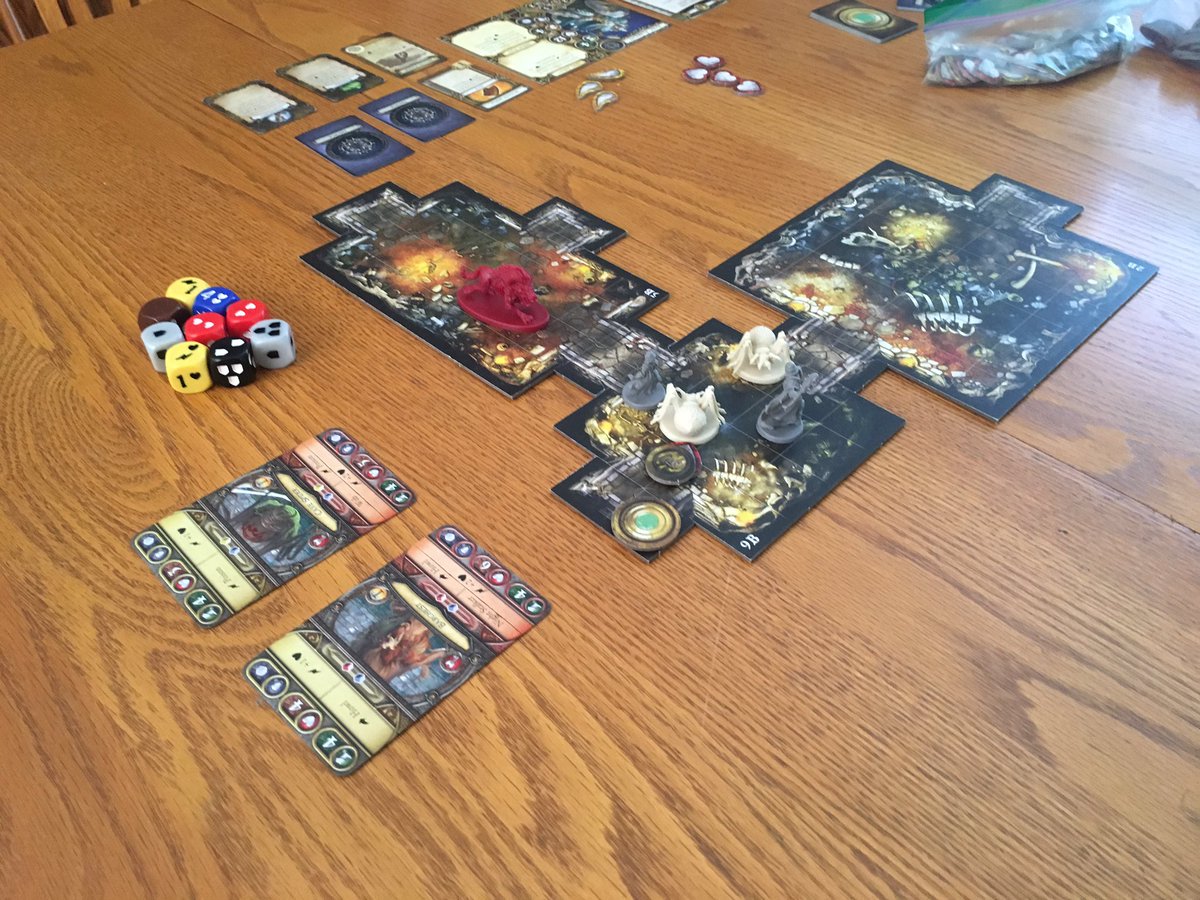 For a brief moment everything in the tutorial quest seemed safe, then come the spiders. 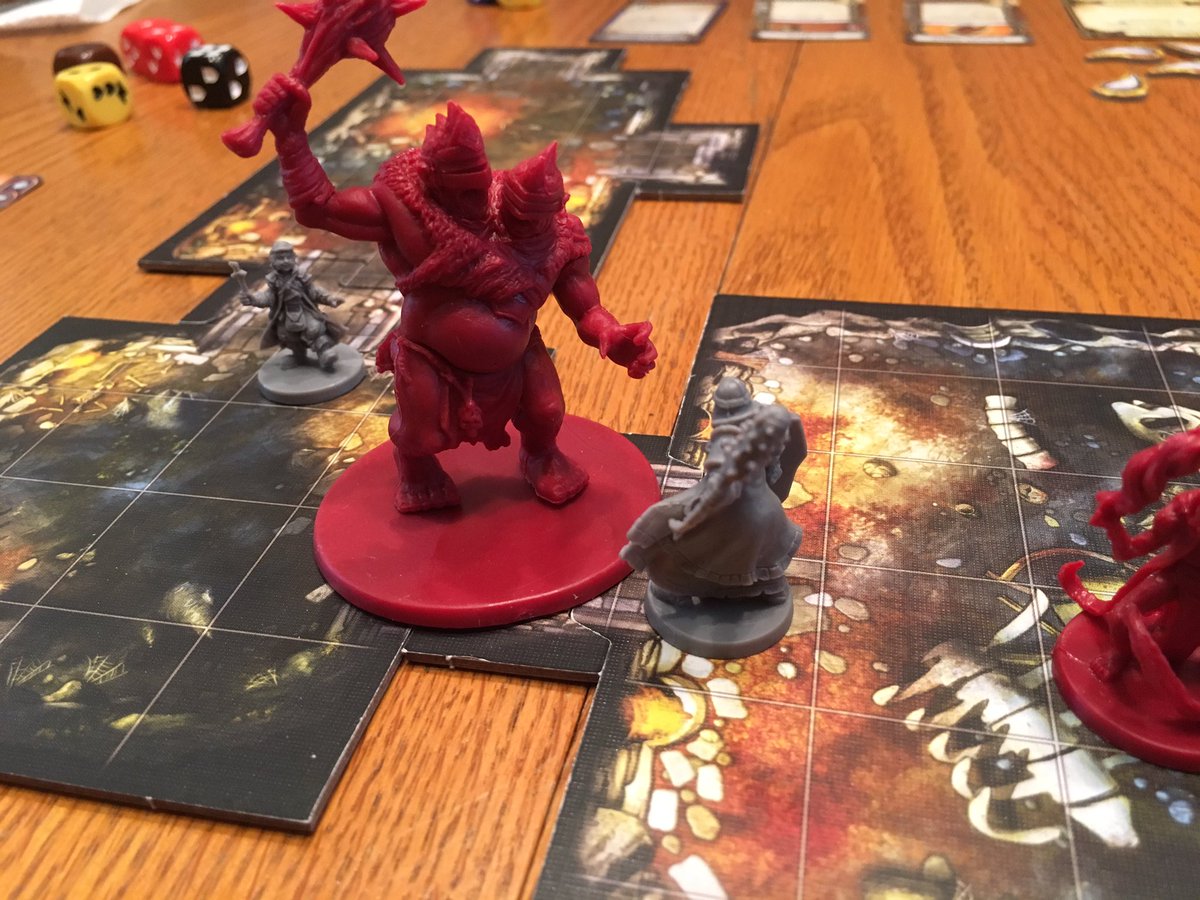 Avric facing down the horrible flesh golem, moments after being tossed over its shoulder like a sack of potatoes.

Within the past two weeks FFG has teased many articles on future products and support for Road to Legend, along with the very scintillating prospect of Hybrid Classes in a future expansion. I am personally looking forward to testing out more of the Road to Legend content and the new Shards of Everdark hero and monster pack.

I will keep this post short for now. I have accrued several topics for future posts, I just need to find a decent regimen for when to sit down and write. Have a wonderful first week of June and try to stay cool! Temperature wise that is, of course I think you’re cool.