Megan here, I want to tell everyone a little about our dog. We may seem a little obsessed with her in some of our posts in the future… especially if I write them.  Our dog Ruby is a Boston Terrier. She is small for her breed only weighing about 13 pounds 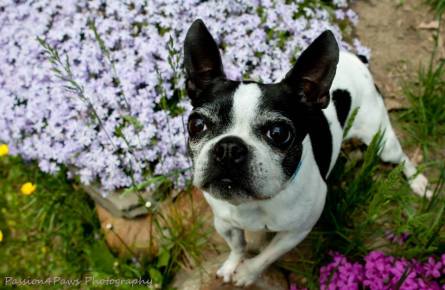 and she is marked wrong according to her breed standard, but that doesn’t matter to us. She is the silliest little thing. She makes us laugh on a daily basis. I brought her home from the veterinary clinic I worked at in 2009. Ruby had come into the clinic with a rescue group that had brought her from Tennessee to New Hampshire. At that time she was in rough shape only weighing a little over 7 pounds, her skin was a mess from where she was before the rescue group had picked her up. The file that came with her said her nails were so long that she was walking on her knuckles. I had never seen anything like this before. So my mother and I decided to bring her home… Once we got her home it was pretty evident that this dog had lived all of her life in a crate. She wasn’t house broken, every time my mother’s dog would try to play with her Ruby would just stare at Maisie like “you want me to do what now?”, she just didn’t know how to be a dog. Living in a crate for her whole life took a toll on her body, she has a hump in her back like a camel, it has gotten better over the years but it is still noticeable.  She had a large patch of hair missing from one of her back legs, her x-rays show that in her past she had some sort of pelvis/leg fracture. She was a mess. it took us only a little while to get her house trained and to teach her to play with other dogs.

In the summer of 2012 Ruby pulled a stunt. Jake likes to call it her “Going Native Experience.” One day I was headed into work for a meeting then I was coming right home. Well I got delayed at work and didn’t get out until around 6.

Jake was getting home when I called on my way home to see if we needed anything. I asked him to check on Ruby, she was nowhere to be found. While I was on the phone Jake searched our whole house and came up empty. When I was pulling on to the exit to our house Jake found the screen she had clawed/chewed/forced her way through. The window Ruby went through was a second story window that overlooks the patio for the apartment below us We searched, and searched until about 11:30 that night and for the next 5 days. We put posters up all around town. Friends and co-workers came over to help us look for her in the next 5 days. I knew the reality, I know what happens to animals who escape, hit by car, stolen, dead from impact… I knew what Ruby’s chances were. I just wanted closure if in fact it was a less than desirable income.

On the fifth day I said to Jake I need a break family friends were having a little pre-Fourth of July get together at their house so we decided to go. Once we got there my mom told me the wine I asked her to bring was inside, I had just poured the biggest glass of wine and sat down when Jake’s phone rang with a sighting of Ruby. She was running along side the highway at night on a holiday weekend. The person on the phone said they were going to try to get her. A few minutes later we were in the car going about 95mph up the highway, I remember throwing a ten-dollar bill at the toll attendant lady and yelling gotta go or something.

While we were driving Jake got the call that someone had stopped and they had Ruby with them, safe. They said that she was pretty banged up and they were on their way somewhere. My father in law met the person and brought to our house since we were still about 25 minutes away. Once I got my hands on her I noticed she needed to get to a vet right away, she was very dehydrated and banged up. She skin was a wreck, it looked like bugs had eaten her alive. The only serious injury she had been 3 broken bones in her foot. She was a lucky dog. It is safe to say we are a little obsessed with our dog.

Ruby we think is about 8 years old now and is happy and healthy. She loves to lay around and do nothing most of the time, frequently pretends she is a cat, avid connoisseur of sunbeams and rawhide chewies, and sometimes she remembers she is actually a dog and plays with her toys.